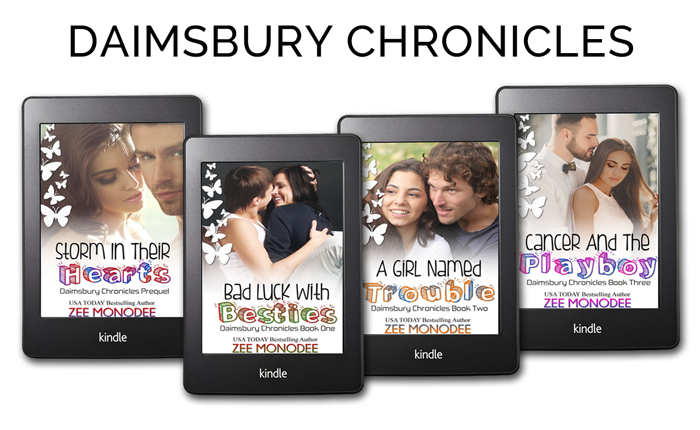 The Daimsbury Chronicles is a cutesy and simple, soap-opera-type romance series about boy-meets-girl/vice-versa in a small village setting in Surrey, England. Contains over-the-top drama in the lives of normal/regular people. Heroes here are known to be sweet & almost-perfect blokes usually. 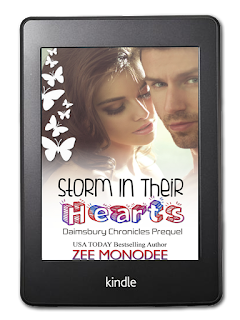 STORM IN THEIR HEARTS (Spin-off/Prequel)

A British billionaire and golden child from Surrey's village of Daimsbury, Lars Rutherford came to the tiny island of Mauritius to take over directorship of his best friend’s shipping company. He’s not here for anything but the job, and certainly not—to the chagrin of the many matchmaking society mamas in the country—to find the ‘right woman’ for him.

Corporate legal affairs specialist Simmi Moyer is rich, beautiful, successful, and climbing the executive ladder with tremendous speed. She’s got it all—or does she? Mauritian society shuns her for being single and childless, and nothing she accomplishes will ever be enough.

They meet on a blind date. As afternoon turns into night and then into day, a tempest brews between them, stirred by uncalled-for yearning in their hearts. Meanwhile, outside, a real-life cyclone storms on the island and ensconces them in a world where only the two of them exist.


Thrust together by Nature and Fate, they discover the desire for something more substantial than a fleeting moment of pleasure.

As the hours pass, Lars and Simmi find something neither had even dreamed of finding—a kindred spirit. Can they can put themselves on the line to step out together when the storm clears up? 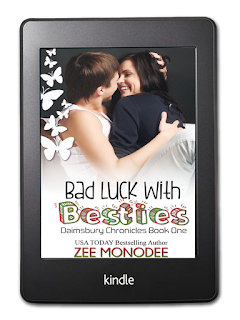 In this first, stand-alone instalment from heartfelt small-town series The Daimsbury Chronicles, two high school best friends torn apart by tragedy in their youth get a second chance at love during a soulful Christmas season.

Honor Whelan always trips into bad luck with male best friends. Abandoned by her bestie of eleven years who got her pregnant during a one-night-stand, she finds herself destitute and alone, with no other choice but to head home to the Surrey village of Daimsbury.

Fifteen years earlier, Honor had left Daimsbury because her then best friend and the boy she’d always loved, Liam Morelli, had gotten another friend pregnant.

Honor had run after this apparent betrayal ... but today, she can no longer hide. Especially not when fate knocks her straight into Liam’s path, and he starts to show signs of wanting a second chance.

As the holidays dawn upon them, will her luck finally change, or will she continue to fight bad luck with besties? When famous male model Luke Morelli returns to his hometown of Daimsbury in Surrey, he doesn’t expect to cross paths with a walking calamity named Missy Taylor. Within minutes of meeting her, she’s got him out of commission with a broken toe. It’s obvious he should steer clear of the troublemaker...but something about Missy intrigues him, making him want to know her better.

Texas transplant Missy Taylor is running away from the privileged life she has known in the US South. Her real identity is under wraps, but Luke Morelli stands the risk of uncovering her lies and half truths the more he stays in the village.

Her secret concerns him, in fact, but Luke doesn’t have a clue what the truth could imply should Missy’s true identity be discovered.

This girl is definitely trouble ... for him ... 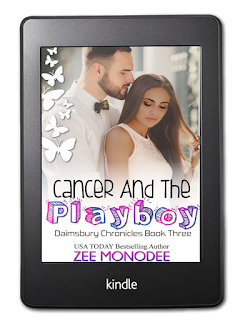 CANCER AND THE PLAYBOY (Book 3)

There’s truth in the saying “It happens when you least expect it ...”

Crafty and resilient, Megha Saran has carved her own midsummer pond from the shark-infested waters of Indo-British society. Until the day she is diagnosed with breast cancer, and a twist of Fate—along with her big mouth—lands her on the path of a man a million times removed from her reality.

Playboy Magnus Trammell has been summoned by his illustrious family to get his act on the straight and narrow before his thirty-fifth birthday. When he meets Megha, he proposes a deal: become a goodwill ambassador for a project he wants to set up, and in return, get the medical care and support his money can buy.

A win-win bargain—until their hearts get on the line …

Megha, mutilated in body and her soul from the cancer treatments, cannot fall for a man who only dates airhead pin-ups. And after a life hiding behind a veneer of shallow, carefree sophistication, Magnus is reluctant to test the deep, bottomless waters that surround this strong and independent woman.

Both crave fulfilment. Will they find it together, against all the odds? 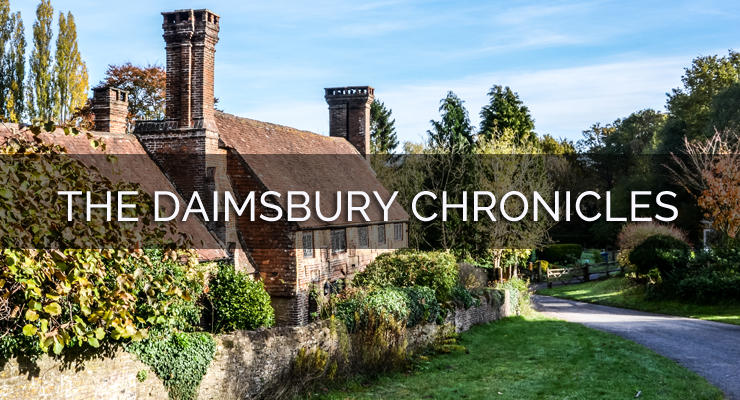