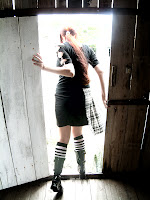 The article I'm about to post here says it all - I don't need to add much (not that there's much I can add to the list). Read on for some of the best advice every woman can get - and also, writers, advice your heroine needs to know.

The article is Elle.com and is a feature of agony aunt E. Jean. You can read the article online here.

Dolls, in honor of ELLE’s twenty-fifth anniversary, I thought I’d reveal how the Ask Eeee column started. It all happened after I was fired as a writer on Saturday Night Live—a hilarious interlude that has lent a lovely piquancy to my subsequent advice on how not to be fired. Anyway, after I was canned, I started writing for Esquire, Rolling Stone, and Outside, covering sex and adventure and sometimes both! In 1993, this led ELLE editor Amy Gross to ask me to lunch at the hottest restaurant in New York—damn, I wish I could remember the name!—and inquire if I’d like to write a monthly advice column. I nearly passed out, I was so ecstatic! I was (and still am) riotously opinionated and don’t mind making readers say “Yikes!"—because every time I’m wrong, hundreds of readers are kind enough to set me straight. So after 17 years of answering questions, the question I find myself answering in this column is: What have I learned? I can tell you, the letters have taught me plenty! Herewith, according to Auntie Eeee…

3. If you don’t question what you believe in, you end up making the same mistakes over and over. When we find ourselves in a romantic quagmire or struggling for an eternally denied promotion at work and our old ideas aren’t working, we must, must, must ask ourselves two questions: (A) Is this idea I’m acting on even effing true? (e.g., Am I so irresistible that this time he really is going to leave his wife?) And (B) What would happen if everyone in the world believed this idea and behaved as I’m behaving now? (This is our old friend Immanuel Kant’s categorical imperative—view every action you take as a universal law. Meaning, if you’re considering lying to your boss to save your job, imagine a universal law that says everyone must lie to his or her boss.)
When it comes to sex and love, question (B) has a great way of yanking the blinders off and giving you a clearer picture of what’s actually going on. Speaking of which…

4. Your chap is not a mind reader. Making him have to ask you what he is doing wrong in the sack will cause him so much anxiety, shame, and humiliation, he’ll regret he even has a penis. Show him what you like. Always choose action over words.

5. Stay attuned to your mother’s vanities. These are the key to how she set out to build your character. My mother always wanted me to be a writer. On my birth announcements, she declared, “A great novelist is born!” Close, but no cigar, Ma.

6. To get rid of bags under your eyes, prop up your bed frame on a stack of books to lift your head a foot higher than your heels while you sleep. The next morning, you’ll look as tight as Russell Brand’s skinny jeans.

7. Are you reading these 25 things standing up? I’ve seen the research, and you better believe I’m bloody writing them standing up! According to the American Cancer society, if women sit more than six hours a day, we’re increasing our chances of dying by 37 percent despite whether or not we work out, compared with women who sit less than three hours a day. When we stand, we burn more calories, engage more muscle, and can whittle the circumference of our waists from a fat eunuch’s to the size of a greyhound’s. Barry Braun, PhD, associate professor of kinesiology at UMass Amherst, told Gretchen Reynolds of The New York Times that if you want to drop pounds, you don’t necessarily have to run a marathon every morning, “just get rid of your chair.” A quick fix: Buy a large U-Haul box for $3, put it on your desk, and place your phone, papers, and computer on top of it. Voilà! You’re standing at your desk!

8. Don’t read blogs written by unhappy, spiteful people. Bad blogs will mangle your mood. Instead, spend an hour a day with your Moleskine notebook, connecting deeply with your own spiteful thoughts. At least they’ll be original. And P.S.: Anyone can make history. Only a great woman can tweet it.

9. When addressing a man’s penis, if you want it to get huge, tell it it’s huge.

10. If you desire a promotion, ask for it. But first, I hope to God you never leave your office before the boss, are always the woman with the clever idea at meetings, don’t hide your ego, don’t play humble (unless you screw up, and then you are very, very humble), and on casual Fridays never dress like you are heading out to do laundry after a couple of bong hits. Now, here’s your secret weapon: You’ll soon be handing the boss a list of the 10 outstanding things you’ve done for the company. Make certain you print that list on heavy parchment paper. MIT, Harvard, and Yale psychologists have found that heavy, more tactile objects make job candidates seem more important. So whatever you’re proposing will be taken more seriously on thick paper.

11. Go play with your dog. Your dog is the one creature on earth you can make insanely happy by playing “hide the cookie” in the living room. (You can also play with your cat, of course, but only if you let him correct your grammar during the action.) If you have neither cat nor dog (nor bird, nor fish), it’s not essential, but if you want to lead a more enjoyable life…why not?

13. If you’re struggling for your “art,” stop making it about the art and start making it about the money. Be Basquiat in your ambition, Botticelli in your dedication, and Buffett with your bottom line. Or, in Andy Warhol’s words, “Making money is art.”

14. Here’s how to nail the job interview: Pretend that the person interviewing you is the one applying for the position and that you’re interviewing him or her for the job. If you do that, you can’t help but be genuinely interested in what he or she is saying, ask interesting questions, and speak honestly—and glowingly—about the company, as if it’s the grandest place to work in the whole world.

15. When you’re in college, don’t worry too much about grades. Other than getting into a decent grad school and associating with the cream of your generation, getting straight A’s means diddly-squat in the real world, where it’s all about hustle, determination, focus, dressing right, sucking up, and who you know.

16. Women say they want a “nice guy,” but show them an asshole who treats them like dirt and they’ll trample over their own therapists to get to him.

17. Wait. You’re telling me you didn’t see that poor homeless woman on the street? Come on. You didn’t notice? Really? If you’re anxious about “hobos” asking you for money, decide how much you can allot per person (a quarter, a buck), carry the cash in your pocket, and give it to every poor person whose hand is out. You’ll experience a rare, nearly forgotten emotion—compassion.

18. If you’re tired of waiting for the dude to pop the question, start introducing him as your fiancé.

19. If you want to be told you look gorgeous, tell people they look stunning. We’re all the prettiest girl in the room, depending on the day, the hour, and the room.

20. When you discover your husband’s cheating, hire an attorney before you Krazy Glue his $60 Hanro boxers to his backside. A lawyer will help you figure out what you want, and when you know what you want, you’ll be able to act with discipline and courage. Then, over cocktails, tell your spouse you know he’s having an affair. Don’t be treacly. Don’t cry. Don’t squish Kleenex into your face, and be prepared to hold your ground. If you stay strong, drop the helpless-wife act, and tell him exactly what you want, you’ll have taken the first step on a trek that could lead to an advantageous divorce…or a thrillingly nontraditional marriage.

22. The three tragedies of life: (A) not getting what you want, (B) getting it, (C) seeing your best friend getting it. Don’t you know you were born to feel competitive with your friends? Jealousy is a little whip given to you by Mother Nature to push you to excel above your own expectations—to be better than your­self. Rivalry brings glory to the human race. And speaking of the human race…

23. Chasing men is the highest purpose in life. As my old boyfriend, the great Arthur Schopenhauer, says, “The final aim of all love intrigues, be they comic or tragic, is really of more importance than all other ends in human life. What it all turns upon is nothing less than the composition of the next generation.… It is not the weal or woe of any one individual, but that of the human race to come, which is here at stake.”

24. You’re spinning on a merry-go-round at no cost. It’s whirling around a star that has hitched a ride on a galaxy moving so fast in the universe you can’t even feel it. So listen to Auntie Eeee, doll. Whatever went wrong yesterday? You’ve already moved on.

25. If all else fails, live by these three rules: (1) Never trust a woman who shags married men. (2) Never make a deal with a guy who wears a white belt. (3) Never try to be “friends” when the affair is over. Not even the great Gatsby could make Daisy stay. After she slobbered over his shirts, it was pretty much finished.

Wiser words were never spoken! Some of these points really got me thinking. I love how the mom expected her to be a writer, and stated, "A great novelist is born!" Way cool :) x