Dictionary.com defines "Endurance" as such:


noun
1.
the fact or power of enduring or bearing pain, hardships, etc.
2.
the ability or strength to continue or last, especially despite fatigue, stress, or other adverse conditions; stamina: He has amazing physical endurance.
3.
lasting quality; duration: His friendships have little endurance.
4.
something endured, as a hardship; trial.
I've been thinking a lot about "endurance" and how it applies to my life recently, and also to the life of every writer out there.

All this is triggered by the fact that I recently picked up my exercise routine again - this one, Flat-Ab Pilates. I have most problems with the fact that I put on weight around my middle - apparently, due to eating too much starch, but also due to some medication I'm having to take. Nevertheless, I am putting on weight and though I'm trying to lose it, I know it's a lost battle I'm fighting. I can, however, make sure that I don't take on more weight, and that I keep myself fit. Firmer if not slimmer - that's my aim right now.

Hence the Pilates workout. It's targetted towards abs, but it's also a total body routine, and I could do with the flexibility and core body strength Pilates brings.

But, lol - has this been a journey! There's the saying "what doesn't kill you makes you stronger", and as cliche as that sounds, it is sooo true! The first time I did this workout, I felt muscles I didn't know I had after I finished only half of the moves. The next day, I was like, "kill me now!" because of all the kinks and muscle pain! This workout is supposed to take around 30-40 minutes - I was still slogging away an hour after I started (and half of that time was to pause and try to catch my breath, and wonder if I've permanently kinked my body *grin*). Look at this move, called Mermaid with twist: 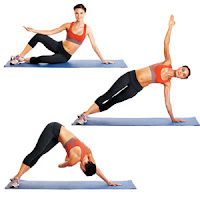 My arms quivered like Jell-O the first time I tried it, and I barely made 2 reps, let alone the 8-10 required on each arm!

Second time I did the workout 3 days later, I still thought I would die the next morning when I woke up.

Fast forward to about a month later - at the rate of 2-3 workouts a week. Today, I worked out, and did all the reps of mermaid with twist (my arms quivered just a little!) and I finished the routine in 45 minutes. I was drenched afterwards, but thankfully, no big pain or kink.

The reason? Endurance! Throughout these weeks, doing this workout, I built my endurance and now what was hard is, well, less hard (it's not easy yet! I look at how the woman demonstrating the move does the Rollover and I'm not even halfway there in being able to bend my body that way!).

I stuck to the workout - and what didn't kill me (though it felt like I was dying at the start!) made me stronger.

I cannot help but realize how much this is true of everything in our lives. We get over a romantic breakup - thinking we'll never pick ourselves up, but we do. We write and write despite the rejections, never mind that we do get the Acceptance letter or not. We plod along and get things done - everything that needs to be done. Mothers, wives, women, writers, businesswomen (and let me tell you at promo, we are all businesswomen!) - we do it all, and it is endurance that take us through.

When I started writing, about 7 years ago, I laboured over my page (I started on real paper with a pencil!). Each scene would be like giving birth without anaesthesia! In my freelance writing, I went through 3-4 drafts for a 300-word article - I all but put the whole layout down with all the info I needed to include in staggered bullet points on an A4 sheet, and I filled in the blanks to make these complete sentences and a whole article. Later on, I would simply read all the info I needed for an article, and go directly to the Word document and just start typing - 1st draft + editing & cleanup = finished article. Same for my mss - I know what I have to include, and I sit down and write the scene. It's now more like pulling teeth now than giving birth. :)

All of this - this endurance - is possible only when we stick to what's hard and we plod along. If we give up along the way, we'll never know when the going might get easier, because we're making the effort, and effort is always rewarded.

Stick to what you're doing - even if you feel like you're going to die. You'll build your endurance, and that's how everything gets easier in the long haul. :)

Other features you may wish to consider are customized core workout programs which simulate interval training or hill training.

Thanks Han - I'll check into those :)