Progress Friday + a few lines from the WIP 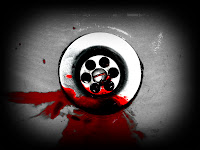 Not much progress to show this week, but I gotta say, at least there is some progress. I always end up forgetting how chaotic my house gets when I have the hyenas underfoot. And I think the whole madness grows more hectic at each and every holiday, the older they get. You’d think your kids growing would imply a little more peace of mind for you, but no, that’s not the case (of course, you no longer get ‘accidents’ at night, and they can bathe/feed/clothe themselves without your assistance. But otherwise, yes – your job keeps on growing.)

And what would be the progress report of this week without a mention of the absolutely nightmarish soap opera we’ve been reluctant actors in, along with (what is now) our former ISP (yes, finally!). I mentioned a few weeks ago on this same spot how awful my Internet connection has been lately. I ended up on first-name/good-friends basis with most of the helpdesk staff there, so much I was calling to log in complaint after complaint. I think the company’s technicians visited my house more than my own parents have in the past few months! Things took a turn for the worse Sunday evening, and we’ve been having a working connection for – brace yourself for this one! – 13 seconds. Yes, you heard me! We have connection for 13 seconds, then it goes AWOL, by which time it takes the modem 3-4 minutes to reset and look for a new connection... and it’s connected... for 13 seconds again, before it loses signal... Damn, that is just no way to live! And not to mention that the TV channels that come in the deal play for 13 seconds, image freezes, blank screen while the connection box resets, then you get another 13 seconds of film (after losing 4-5 minutes of the action!). How on earth can anyone not go nuts with such a service! Enough of it – push came to shove and we did shove it, all right. We cancelled the connection on Wednesday (and suddenly the company was speechless that we cancelled and weren’t even moving to a different connection package with them! Ha – take that!) and we tried another ISP, that we’d used in the past. This one too turned to be an issue, because... we couldn’t pick up enough signal off our modem where we live (which, incidentally, is smack-dab in the middle of the third biggest city on the island!). 7 minutes to get Hotmail to open, when we even managed to get a connection. Nuh-uh! No can do (can you see the stress mounting here?).
Finally, we were forced to go to another ISP – yesterday morning. This one is more expensive and is a limited connection, but at least it does provide service where we are, and the connection is reliable. About a whole day lost yesterday to that, and today I had to go out to go cancel the other connection that we tried. What a week! I don’t wish that kind of hassle on my worst enemy!

Is it a wonder then when I tell you the only day I managed to write and get some work done was Monday, before the sh*t hit the fan? Moved up some 3,500 words on Transient Hearts, which puts me just beyond half-way on this WIP.

I know I always say that I plan the week to come to be one where I’ll write, but with my new limited connection now, I won’t have any reason to be online unless I really, really, have to. Which implies time not online = time to park my arse in chair and write! Transient Hearts should see ‘The End’ written on its Word doc before May 5.

Who's gonna keep me to my deadline, and crack the wet noodle? :) 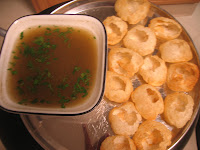 Leaving you now with a few lines that I’ve written this week. The heat is ramping up between Shania and Grayson, and in this scene here, she is ‘feeding’ him something called pani puri, which is a small, fried hollow puff of dough that you dunk in hot spicy water before eating. You can see the pic right here

Before she could realize what she’d done, Shania brought the pani puri in her hand up to his mouth.
In a flash, his eyes darkened, and he wrapped a hand around her wrist. Slowly, he pulled her hand closer, and he opened his lips, took the pastry from her fingers and into his mouth. His soft lips grazed the tips of her fingers, and he didn’t let her pull back while he savored his puri, and swallowed.
“Delicious,” he said softly.
Shania sucked in a breath. His eyes were hooded, jaw tense, and that small smile hovered on his lips.
“You like?” She sounded breathless, her voice so low it could’ve been another woman who spoke.
“I like a lot,” he replied just as low.
He still held her wrist, and without releasing her, he stood.
With a single tug, he could pull her to him. Right then, there was nothing more she wanted than to be flush against him, to have his wide, warm body on hers.
Pull me to you. Dare she ask it aloud though? She could be brazen, yes, but this soon, and with a man she barely knew? She debated the question endlessly in her mind, those split-seconds looking like they lasted for an eternity, until he broke the quiet.
“Come with me.”
...'

Weekend now to be spent on edits for Before The Morning, Book 2 of the Corpus Brides series, that’s to come out with Noble Publishing on May 7. Wish me sanity!

do you need the net to write? So there are 3 cities on your island - I didn’t know. I’m meaner than you and I would wish that on my worst enemy - I have several. What is limited connection? I haven’t got much done either due to family issues.

Have wet noodle and will crack it ...

Nice snippet - sensuality is sometimes more fun than sexuality. I can’t imagine where he is taking her....

I've come to rely on having the Net always on whne writing, to check an info right away or if another tidbit of research is needed. And lol, yeah, maybe my worst enemy deserves this :)

There actually 5 cities on the island, and a slew of small villages that are mostly scattered around the coast. The cities are mostly inland.

And limited connection is one that I have a data limit - if my uploads/downloads go beyond that number, I pay extra or even get cut off. Pain, but what can ye do?

And glad you liked the snippet! I agree, sensuality is way more fun and enticing than blatant sexuality :)

XOXO, best of luck for work this week