It's been a while since I last posted a progress report. The thing is, I didn't have tangible progress to show on my work. Yes, I've dabbling in a few projects, none less getting the brand-new Africa-centred line, Ubuntu, up with the folks at Decadent Publishing (more on that soon, I promise!). But I haven't been writing, not actual words to make sentences to make paragraphs and pages and chapters...

That being said, it's been a hectic time full of new things and ideas, and today I can tell you more about one of them. :)

Guess you do know by now that Natalie G. Owens, the wonderful author with a writing voice that gets you to sigh and wonder how any words can seem so lyrical when strung together - well, you all know she's my bestie. The sister I never had. We found each other rather late in life (some 4-5 years ago, actually), and despite me living in Mauritius and she being first in Atlanta, Georgia, USA, and then on the island of Malta in the Mediterranean, over a few emails we 'clicked' and never looked back.

So sometime during the past months, after Natalie went indie, we started talking about, maybe, why not write a series together. We thought of an anthology with a similar theme ... and before we knew it, we had moved into whole new territory and were talking of a truly collaborative work, one co-written and that we could have as an ongoing series.

I cannot tell you at what point and how or when we came up with the ETERNELLES project. In the true spirit of collaboration, we wanted each of our talents to shine. My voice is much more active and in-your-face, while Natalie's is more lyrical and deep, like a rambling stream of which you find the depths little by little, every time you look more closely.

The solution came to us in the form of a story with 2 heroines - one written by me, one by Natalie. Two heroines, each with her distinct personality. We talked, we must've emailed each other 25 times a day over weeks, we compiled and we searched and we dug and we imagined...

...and this is how the ETERNELLES series came into being. That word is French for "the eternal ones/women" - fitting, as our heroines are immortals.

Today, I tell you more about this project - here you are with the blurb, and the cover.

For more than 2000 years, an immortal woman has looked for a reason to live...
Beautiful and ruthless, Adrasteia 'Adri' Dionysios is the only mythical being of her kind, the unlikely daughter of the god of wine and revelry, Dionysos, and a maenad. Banished to Earth from Olympus during the Greek Dark Ages, she has roamed the world fending off the attentions of men and the petty jealousies of women while putting her knowledge of battle and her immortality in the service against Evil. Until the day she finds a mysterious baby girl in her backyard. Her life is finally complete... but now unknown forces are after her daughter. Furthermore, the dubious role of an elusive man in her life only serves to complicate things further.

A young woman who never asked to exist...
Born with phoenix and gypsy blood, and with superior mental prowess, Seraphine 'Sera' Dionysios' origins are as yet shrouded in mystery. Her very existence defies Nature, just like Adri's. As a woman who has loved and lost, she would rather have died after a vampyre tried to make her his. But, Adri made the only choice a true mother would make: the one that would save her child. Torn between a mother whose blood she doesn't share, and a man who now possesses her soul, the only thing Sera can still cling to is her heart...

Adri and Sera fight for the innocent, but who will fight for them?
When the forces of Evil breach the lines of Shadow Bridge, the town where the mortal human world ends and the supernatural realm starts, it is up to these two women to find out the answer behind a prophecy as old as time itself.

The citizens of Shadow Bridge know one thing above any other: always protect the portal. In a place where anything can happen, the very worst will take place... unless Adri and Sera can stop the prophecy. 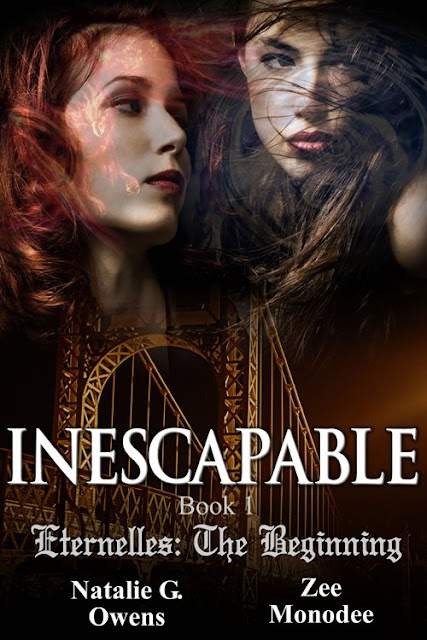 Yes, the women on this image reperesent the heroines - Sera on the left with the Phoenix on her face, Adri on the right with the ripple of water above her image. And FYI, Natalie is writing Sera; I am writing Adri.

We just finished with the full character profiles and the outline, and have started writing Book 1, Inescapable, which will come out in April 2013 on all major indie platforms (Kindle, Smashwords, Nook, Sony, etc).

Both Natalie and I cannot wait to share more about the series with you all. We'd eager to share how this one is different - we're both TV nuts, and this series mimics season arcs of popular shows like Supernatural, Grimm, Once Upon A Time, Charmed, True Blood, Vampire Diaries.

Get ready to meet Adri and Sera; along with a slew of other mythical characters as you'll uncover the hidden depths and nooks and crannies of Shadow Bridge. And, be prepared to meet the men in these two women's lives. I can promise you both Des and Rafe are heroes that'll bring you to your knees!

I'm so, so excited to share all this with you today! It's been killing me to keep this on the hush-hush, and now we can finally let the (squirming!) cat out of the bag!

Hope you all have a lovely Friday and weekend, peeps!

PS The Progress reports should come in more regularly now. Feel free to ask me about progress if you don't see me chime in here every Friday! :)

So happy to be writing this with ya, girlfriend. Your post is so much better than mine, lol :) hugs xx

Lol! I'm sure yours rocks! XOXO

I have to say ladies, this sounds like a fab story. I can't wait to learn more about it, and it's definitely going on my "to buy" list. :-D

It sounds awesome and the cover rocks! I'm eagerly awaiting the release. :-)

Awww, thank you, Elizabeth! This project is really close to our hearts - cannot wait to share it with everyone :)

And the shows, lol. Nat and I are always talking about those show's plots, and one day it hit us - why not make that work in our advantage?

Thank you, Rhonda! You (along with Elizabeth!) are on the list to hear about the book the minute it's ready :) XOXO