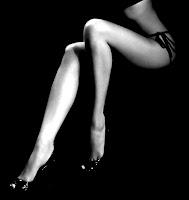 Lol, looks I'll really be able to do a whole week of posts, after all. Giddy feeling (which has been lingering since Monday, when I got some pubbing good news. More on that tomorrow!).

But yup - back on this Thursday with a new linked article. Browsing through my stash, I found this one and it called to me. Since last week, we went after 44 places where you can find eligible men, it comes to mind that you (or your heroine, in your book/s) will be doing everything you can to snatch up the attention of that elusive creature called the 'eligible bachelor'.
Somehow, can we end up doing too much...?

Seems the case. I mean, we've all been single at some point, and even in our relationships, there are times when we've wanted to come across as sexy to our partner. And with hindsight, you realize you've gone a little too far. How? Check out those 4 things that might clock us on the head as sexy (esp during brain-AWOL moments such as late partying nights or, even, a bad day!), but really aren't.

And trust me, after reading these, you'll at least kinda agree with these article authors... When I was younger, I've played the helpless princess too many times to count, and it's a wonder how my man has not simply dumped me for being such a brat. He must have the patience of a saint (or be really in love... I'll settle for that, lol).

Article came from Betty Confidential, written by Elizabeth Marie, posted in and around August 2012. Find the whole thing online here.

4 Things You Think Are Sexy That Really Aren't

Sometimes what with think is a sexy turn-on is actually a major turn-off!

Have you ever thought you were being so ultra sexy and alluring, only to look back days, weeks or months later and cringe, thinking “WHAT was I thinking?” We have too, so we've compiled a short list of the common things women do that they think are sexy, but just...aren't!

1. Showing all your skin at once.

Sometimes women get a bit overly excited when choosing what to wear, or more specifically, what not to wear and we think it's a genius idea to wear the tiniest articles of clothing in our closets if we want to attract a man. I think it's because we all saw the movie Clueless one too many times and really took it to heart when Cher said, "Sometimes you have to show a little skin. This reminds boys of being naked, and then they think of sex." While, yeah sure, it's always fun if the guy you have a crush on thinks of sex when he see's you, but you're more than sex; You're funny and interesting and fun to talk to and make a damn good omelet. Don't blind him with so much skin that he forgets all the important stuff.

Does this word make anyone else wildly uncomfortable? I mean, we're adults right? And we're having sex...via text message? Ok, got it. Texting is probably the number one form of communication these days, which is a whole other depressing topic, but of course we couldn't leave well enough alone...we had to go and spice it up and turn it sexual! The thing is though, if you're dating someone and like, actually see them or talk to them all the time, what does a hot sexting session bring to the table? Not to mention, my iPhone likes to embarrass me on a daily basis with it's absurd auto corrects, and that's just when I'm texting my best friend. If you've gotta get your rocks off and you're not with your man, get thee on Skype and at least see each other while you tell him all the naughty things you'd do to him if he were there. Or just go read Fifty Shades Of Grey like every other pent up woman in the world!

When I was growing up, I'd sit at my grandmothers vanity for hours, mesmerized by her collection of beautiful bottles and jars from Charles of the Ritz, Chanel and Escada....and Neutrogena. Neutrogena light sesame body oil, to be precise. For my entire life I believed that body oil was something very glamorous and a must-have if I wanted to be a beautiful woman with the softest skin in all of the land. Um, you guys? That crap gets everywhere! You can't get dressed for an hour after you put it on, and sometimes at the gym later on in the day I'll look down and realize I'm glistening...and not in a sexy way, more like a “holy crap I look like a disco ball exploded” way. Sure, it makes your skin soft, but what's the point if your man can't touch you for hours after you put it on? My advice? Jergens. Not glamorous, not sticky.

Isn't it so hot when you're in a time of need and a sexy man swoops in and rescues you? It feels good to feel protected and taken care of, so good in fact that some women pretend to need rescuing when they really don't. Getting a flat tire on the freeway during rush hour is an emergency, and calling your boyfriend in tears is perfectly acceptable. Forgetting to put gas in your car and complaining that you have no way to get to work in the morning is completely unacceptable. Sure, guys love helping their girl out, but they don't want the two following things to happen:

1. They begin to feel taken for granted and used and

2. They begin to realize that the woman they've been dating can't take care of herself. So let him save your day from time to time... just not everyday.

Elizabeth Marie is the social media manager for We Love Dates, a worldwide online dating site and maintains their popular We Love Dates blog. Liz can be found sweating it out at her favorite hot yoga studio or laying on her couch watching copious amounts of reality television. One of those things is not like the other. Keep in touch with We Love Dates on Facebook or Twitter!

LOL! Funny, innit, but so close to reality too :) XOXO