Link Thursday: When writing the single heroine... What not to write/say 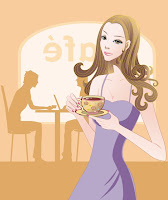 Apparently the last thing a single girl (and who's been single for a while) wants to hear about is her single status.

I came upon this article this morning during my browsing trek. Have to admit I'm guilty of some of these 'sins'. The last time I was single was ages ago and I might have lost touch with what it's like to be a single gal today.

But while some really do sound awful (the poor souls who heard these!), some really doesn't apply 100% of the time. Like, it happens when you're not looking. This did happen to me! I met my husband at, of all places, a religious ceremony, the kind of which generally put insomniacs to sleep. I really wasn't looking for a nice jeans-clad butt there!

Others are classics that go beyond borders and boundaries! Like, so why are you single? Uh, because I just got divorced? Watch people scamper faster than a bolt of lightning hitting their arse then!
The Mum-&-aunties' favourite - you're too picky. Really? Asking for a bloke who won't 'reject' the proposal of marrying me because I appeared in front of his mother that very first time in jeans and not a sari/kurti suit? That's being picky?
The best  though - he's out there! (I've never said that to any of my single gals, thank goodness). Okay, so where is he? Hitchhiking his way around the galaxy?
And oh yes, don't forget - at every wedding, you're next, say the aunties and the uncles too. And you're only sixteen. Yikes!

Others, yup, guilty as charged (he just wasn't the right guy for you).

So take a look at this advice and find out whether you're guilty too. Your single friends and ultimately, your heroines who always start as single (desperate or not... Chick lit, anyone?) will thank you for it!

The original article appeared on the MSN Lifestyle webpage, written by Erin Meanley. You can find the full page here http://lifestyle.msn.com/relationships/articlematch.aspx?cp-documentid=24519920>1=32023

A Glamour dating blogger collected of 19 of the most-hated, tired and depressing clichés about being single. Read them, and swear never to use them on any of your single friends. Ever.
By Erin Meanley

As a writer, I avoid clichés like the plague … ha, ha! But seriously, clichés are old, tired, and they show absolutely no thought. I mean, do I make you read that some guy's skin was as white as snow? No. It's a major insult to your intellect. So when I have to hear a cliché or overused saying in the real world, as a response to my newly single status or some other dating dilemma, it's offensive and frustrating.

Why do we have so many sayings and maxims for dating? A single gal is likely to get slammed with them ad nauseam as soon as she expresses any unhappiness at her situation.

Since we could all use a good laugh, I asked some friends and Twitter followers to send in their most hated adages. I know you've heard them all before (obviously), but I just couldn't believe how many there were! Here's a tiny compilation. Enjoy — today, they're not directed at you!

1. It happens when you're not looking.
"This is just bull. Some people find people when they're looking; some don't. You're not doing anything wrong by going out and meeting people." —Beth

2. There are plenty of fish in the sea.
"I dated a guy whose last name was Fish. People just had a BLAST with that one." —Kelly

3. So, why are you single?
"I generally dislike this question. I mean honestly, if I knew why, I don't think I would be single right now, now would I?!" —Erica

4. You're too picky.
"This may be true, but it feels like I'm getting criticized for my taste, vision, and close-mindedness — when I'm already down." —Sarah

5. You'll find the right person for you.
—Kelly

7. It was just bad timing.
"Like it's so easy to dismiss a guy on such an emotionless and objective reason." —Taryn

11. Well, when my boyfriend and I first got together…
"Wait, I still want to talk about me." —Elisa

12. When the time is right, you will meet someone.
—Betsy

13. Wow, I wish I were single and in your shoes!
"Really?! I'm pretty sure you CAN be single if you actually want to be. That there is an attainable dream, so if you aren't messing with me right now out of pity (which I suspect you are), please go for it!" —Kim

15. It will happen when you least expect it.
—dlegas05, via Twitter

16. Some guy is going to come along and ruin your career/life plans.
"I am 32 and no one has ruined the last 10 years of plans." —frolicblog, via Twitter

17. But you're so pretty! Why don't you have a boyfriend?
"There's just no graceful way to answer that." —earnesteats, via Twitter

18. It just wasn't meant to be.
"Any of these platitudes are exponentially more annoying when coming from the mouths of smug marrieds." —Reberoodle, via Twitter

19. Sure, my guy rescues kids from abusive homes, donated my sister a kidney, and picks up fresh flowers for me daily on his way home from work, but will he QUIT IT with the sports on TV already?
"Single people just hate to be complained to about petty relationship stuff. If you do this, I'm not going to want to hang out with you. (In fact, maybe I'll call your boyfriend and ask him if he wants to grab a beer and watch the Yankees game?)" —Kim

Bottom line, if you're in a relationship or married and you don't have any specific, original advice or wisdom for your single friend—and you must use an established saying — we would prefer to hear neutral ones like, "This too shall pass" or "Take it one day at a time." They are so much more helpful and comforting — you have no idea!

Also of note: not one person I polled mentioned they were tired of hearing, "He's just not that into you." I think that's because it's not condescending. And apparently, it's not overused. So that one is still okay to say. For now.

So funny! I've heard them all. I go out for dinner/movies alone all the time--who wants some jackas...oops! talking through the whole movie or a meal that would have otherwise been delicious! Boy the looks I get when I ask for a table--you know the "Gee, you're going to take the whole table for one person on a busy Friday night kind of look" I LOVE IT!

Lol J! Those looks must be pricesless!
Look at it this way too - you start the weekend on a great laugh, if this is what your Friday nights look like!
Hugs

There's only one thing worse than an overused cliche... and that's a cliche that's so stretched out that you ponder committing seppuku before it's done (for example, Dennis Miller cliche's). :)

Lol!
Hey Scanner, glad to see you could drop by!
Hugs!!

Lol @Scanner! At least someone recognises it's not in vain! :)