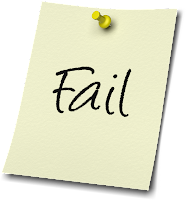 See the pic on the left here? That's my week! As a writer, I completely bumbled it. No new writing done, and I didn't even have a chnace to update the blog yesterday.

Yes, I know, I'm human too. My hubby's family (the one who's intent on gathering and celebrating at the drop of  hat) have concocted a weekend from la-la-land kind, full of lunch, dinner, gatherings and what else. Of yesterday, I recall only putting my laptop to sleep just before lunch, intent on getting back, but I never got the chance!

At the same time, that's not much of an excuse. But I'll tell you something. I'm dealing with life, and trying to be a better mother this year. In the past, so much working and writing and just running after a proverbial carrot dangled before me from a stick, I nearly lost two of the most precious things in my life - my husband and my child. I had no time for them, was just a physical fixture in their life. Writing for me had become emotionally unhealthy, because you may be the biggest writer ever, and unless you're single and without kids, parents, siblings and friends, you are not an island and do not exist in a vacuum. I had been led to believe this, that as long as I wrote I would find my happiness. But that was misleading, because I wasn't just a writer. I was a wife, mom, daughter, sister, friend.

So this week, I failed at being a writer. I was instead a wife who snuggled with her man in the evenings under the same afghan throw to watch movies together. I was a mom who sat down for hours on a baby quilt in front of the shell of a plastic push car and who got taken at first on a supersonic flight around the earth, then in a limo to the beach, and finally on a spaceship to the Star Wars galaxy. I was a daughter who sat down twice this week to have tea and chat with her aging parents, who watched the smile on their faces just because I was there (as if my presence made the whole world brighter!). I was a friend who rekindled with a long lost school chum who is getting married in a few days, and I was also the best friend for whom 3 years of ocean-wide separation meant nothing when she met her best friend and just started to talk like it was yesterday we last saw each other. Uh, the sibling thing is kinda lacking... I left my brother an FB note when he in fact lives just 15 minutes from my place... But what can you do? That's today's technology, innit? :)

So fellow visitors, I may have been remiss as a writer this week, but I am happy that I got to be everything else. I am who I am, and all these facets make me this specific person. So yes, I choose to be everything. Maybe when I die people won't remember me for the long list of books I've left behind, but people might remember me for a touch of sunshine in their existence.

All of these experiences make your life richer and make you a better writer.

My life is just the opposite, writing filled the void that existed as a result of having nothing to do. Hubby doesn't like to socialize or travel, family is busy doing their own things except for major events like birthdays, etc. I needed something to give me a jump start, and writing did just that. Today I'm attending the Atlanta Black Book Expo with a bunch of writing friends.

Hey, Sweetie, you enjoy your family and friends while you can. Life is short and tomorrow they might not be there.

You're right - all these experiences and relationships make life richer, and consequnetly, you also have a sort of base where you can pull feelings and recollections to feed the writing.

About the void, I think it's a question of where you are in your life. Your kids are grown up, so writing fills your life. Lol, I'm trying to cram it all in. Yeah, I know I'm crazy!

Well said - life is short, and we need to live it fully.

You know I love you. I'll be there for you always.