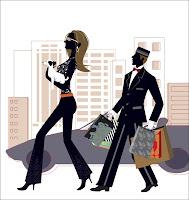 I must be mad to even consider going out shopping at this time of the year. The commercial centres are full of people, and not all of them places are air-conditioned. The temps are in the 90s here, higher on the coastal regions. A typical tropical summer... Plus it's Christmas time, and the decorations! If you manage to pause for a few seconds to shut your hanging-open mouth (so much all the places are battling for best winter decoration in time of summer), you realise you are having an overdose of Christmas commercialism (Uh, hubby's reminding me I don't say this when I'm in front of the chocolate box displays... Oh well...).

So yeah, Christmas commercialism (the rise of the capitalist world, etc, etc) yet what do you do when you see those amazing deals out there???
I'm crazy, yeah - because I love to do my deals'-shopping during December. I even buy the kid's school stuff now, not waiting for the 'deals that are not deals' they'll all spring in the first week of January (school runs from January to November here in Mauritius). Now this means dragging two (and sometimes three, when my stepson is here) very, very, very reluctant and allergic-to-shopping blokes with me when I have to shop for stuff for them. And that's not even possible all the time! Case in point - hubby needed new shoes, but the man who makes everyone quiver with just a glare turns into a shying-away mass of muscle when the prospect of entering a store comes around the corner. Men, sheesh... So what do I have to do? Right - go in, choose shoes for him, make sure I got the size right, buy, and dump them in his lap. Same goes for the kids. Sometimes I think I missed my calling and should've turned into a personal shopper!

But you wouldn't get me to do all that if it weren't for the deals! I mean, people - I bought a pair of winter suede booties at half-price (!!!) right now in the middle of summer. I know the trend might not be booties next winter (actually boots and booties are all the rage this winter in Europe, so next winter in the southern hemisphere, these will be hot stuff!), but if a girl shops by the classics, hmmmm... The deals... :)

So, been indulging in some bouts of therapeutic shopping (between bouts of forced shopping for the blokes) while I still dash to and fro the hospital. Got a scare last week about a lab result, but as people with a chronic illness will reckon, sometimes 'bad' news is good news because 'it's not worse', know what I mean?

Now while I bask in this 'bad news that is in fact good' (words of my doctor, not mine!), I'm looking forward to a nice, not too eventful week. Do you think that's too much to ask?