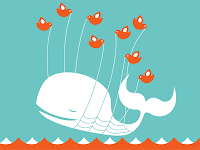 Inspired by a post on Jodi Hedlund's blog that I read a few days ago, I have been giving a lot of thought to where I am and how I can be in all places to the best of my capacities. After lots of deliberation, to-and-fro-ing, pondering, thinking... I agree with what she says:

That we can't be everywhere and do a good job about it.

This got me thinking about my Internet presence. I agree, I am not all over the place (and totally not as socially prolific as a lot of people I admire!) but even this is, as many writers can attest, a huge time-suck.

I started the year committing myself to writing at least 4 books. 3 of the 50K length variety, 1 of the longer variety (80K+). And these are not gonna get written if all I'm doing is hopping all over the place. As my health takes another look-over and forces me to be expressly where I want to be, I have to prioritise...

...and decide where I want to be. Namely, Facebook and this blog. Sadly, I'll have to let Twitter go.

I didn't come to this decision lightly, but things are pointing me in that direction, and I'll try to explain.

First of all, I'm not good at Twitter. It feels so much like talking to myself. Yes, there are @whoever replies, but that's another issue (scroll down).

Second, my location. Not many people in Mauritius are on Twitter (as opposed to Facebook), so the site doesn't get the same kind of bandwidth support here. Yeah, true - I'm not even sure if what I just said is possible (bandwidth-wise), but this does look to be the case.

Third, bandwidth/connection woes again. Every time I'm on Twitter, I time out. I'm either told I timed out, or I get that huge whale being lifted by little birds image (the one up here. Yeah, totally unnerving, innit?). Not conducive to tweeting, you'll agree.
Try to tweet - time out and you have to re-type the tweet... to maybe time out again.
Check your followers' page to see who is connecting with you... sorry, you timed out, try later.
Check your @replies - seems like you timed out, try again later.

Fourth - I'm a zero at navigating Twitter. Watching the sheer amount of Tweets that flow in gives me a headache. And how can you expect people to follow you when you're not following them? Tweet-pics, I know what they are, have no idea how to see them, use them, add them. I tried a few times to read the scroll, reply, check profiles. A few hours had gone by me...

Fifth - location again, and the time difference. A big feature of Twitter is the immediacy of the medium. I mean, look at the #AmericanIdol discussion that went on during this season's premiere. Sadly though, when most of the people I can interact with are Tweeting, I'm asleep. I'm 8-12 hours ahead of US time, so that makes my working day Americans' sleeping time. As a rule since the fiasco of my 2010 time/family/marriage management, evenings are pretty much off limits for 'work'. Yes, I do drop by my email and Facebook sometimes at 8 PM, but it's a cursory zip-through, which I can't do on Twitter.

Sixth - my phone balks at connecting to Twitter. Again, it seems that since Mauritians don't use Twitter, it doesn't get the kind of direct link I need to access it via my 3G service provider. The link, if accessed, takes ages to load, takes ages to let you log in, and (see a pattern here?) most probably it'll time me out.

Seventh - I hate being one of those who only self-promote on their Twitter feed. The only reason I can even do that is because I've linked NetworkedBlogs with my Twitter feed. If I try to go in and add my link, I'll (you guess it!) time out!

I really would love to be able to handle Twitter, but you gotta admit defeat when you're fighting a losing battle. I have to prioritise, I have to time-manage, I have to write, I have to have a life outside of the cyber world, I have to be a wife and a mother and basically a person who takes a minute a day to look after herself.

lol, don't know about bandwidth, but I left Twitter a year or more ago because it locked up on me--every single time!! Talk about frustrating. Even more frustrating was trying to stay to that count! I may tear this page out of your blog and do some more de-cluttering myself!!

I know exactly what you mean. There is no way I can keep up and I have so many things to do that I really can't sit and watch tweets detailing people drinking a favorite coffee or the kid won another beauty contest. I've even had to quit blog hopping because it took me so long to go from blog to blog and read a ton of posts.

So glad you're almost finished with this last round, honey!! I remember how sore Mom got. *soft internet hugs*

I agree, Zee. Besides the bandwidth issues, I find twitter just too... NOW. Even without the time difference, I can't keep up. The stuff I like to see gets buried before I can.
Time management has got to be more important than a cyber presence. I think. Maybe when I'm so successful I can afford to hire a staff to present me to the world... :)
Hope you're feeling well!

Whew ladies! I thought it was just me who didn't 'get' Twitter.

J - Locking down. That's exactly what happened to me, when it wasn't timing out! Lol, on for more de-cluttering then!

Chelle, I know!! I mean, twitter is great for seeing what agents are talking about but is it really worth it that much? There's not enough hours in a day, can we afford to let some drift by while we just read stuff? Plus if you try to reply, it takes you to a new window, and then you have to come back to the feed, scroll down and down and down again, and then you want to reply again, and so on.

I'm keeping the blogs to a minimum too. I catch them on my dashboard and read the first few lines to see if it interests me.

Nearly done with this round, tomorrow should be my last day! :)

Penny, yup indeed - too Now. Like, if you haven't caught it Now, you shouldn't bother to reply or even acknowledge reading the Tweet. What's the point then? At some point Twitter can start to look like people-stalking, because you're reading about their each and every minute. :)

Feeling a tad better, nearly done with this round of treatments. Just waiting for the doctor to deliver a bomb now (coz she always does!)

I'm with you Zee. I have a twitter account but I can't remember the last time I even checked in--LOL, i think I even forgot my password.
I never did get the hang of twitter or even care too.

I'm more likely to give up facebook than twitter. I find twitter does alot more promo for me. All the links that show back to the stats on my blog have twitter somewhere in there. Plus- I've built a nice circle of twitter friends.

Lol Brenda. I've had to write down my Twitter password so i could find it when it was time to log in. Never got the hang of that technology.

Trish, you amazing girl! I admire the people who know how to handle and exploit all that Twitter can offer.

Nice to see you!

Good for you, Zee! I'm thinking about doing the same thing. I'm trying to write more and don't need the distraction!

That's exactly it - at some point, social media becomes a distraction and it takes away from writing. Not only time, but also the energy and drive you could've fed into penning even a couple pages a day. I'm always wiped after trying to keep up with a Twitter feed, and that energy and time could've gone into my writing, instead of me banging my head against the wall because I have no drive to write when the day is nearly over.

Thanks for dropping by, girl!! Hugs