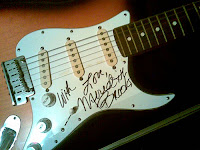 Are you guys inspired by songs? Whenever I'm writing a story, there will be a song or two that will feature as my theme - the lyrics, more often than not, will have an echo of what the story is about.

The one I am currently working on doesn't have a huge playlist. Some of my works have had a full album dedicated to them, no less than 5-7 songs on their soundtrack. This one focuses a lot on characters, and it was hard finding songs that would put across everything that the hero and heroine were going through.

Until I stumbled upon What Would Happen If We Kissed and Halo. Suddenly, I had what I didn't know I'd been looking for. These were my goals - what would happen if they kissed? When would that happen? How do I take my heroine on this journey that will make her find her angel in the hero, in the light of his halo?

The first time I heard What Would Happen If We Kissed by Meredith Brooks, I knew there was a 'story' in there. Listen to those lyrics, watch the video! Can you describe sexual tension any better? It's a song that takes you, flips you over, and lays you back down in a crash, because of the power of its words, of its emotions! It became my story's love anthem, the pacing of their feelings, the culmination of their attraction.
Watch it, you won't be disappointed!


Then there's Halo. The lyrics to this seem to have been written for my heroine. She who has to trust, who doesn't know how to, falls in love with this man and has him bringing down all the walls she'd built. Powerful, powerful words, a heartfelt declaration, that embodied the destination point I needed my heroine to reach. Here's the video - listen to those words!

Excellent choices! This book is going to sell. I can feel it.

Lol. Thanks girl! From your mouth to God's ears. :)

Glad you liked the songs.

Hey girl! I've got a play list of songs too. I look for ones that show where the characters head is at. One that stands our for me now with what I'm working on is "Miss Anonymous" by Bobby Valentino, it perfectly describes where my hero's head is at while trying to find his heroine.

I agree with Chiki all around.

I've never heard that first song before. I like! I listen to cross-over symphony, country, and some rock when I write. If it's a really tense scene, I'll get my head scrambled in the mood by listening to Nine Inch Nails for a few minutes (can't take too much of them). Great choices, Zee!

That's exactly it - where the character's head is atm. Perfect way to sum up why a song makes it into the soundtrack.

Thanks for dropping by, girl! Hugs

I stumbled upon that song by accident. Watched a fan video of Jared Padalecki's hot/kiss scenes and she used that song as the backdrop. It stuck in my mind and I just knew it fitted my story to a T!

Ooh, Nine Inch Nails! Good one. One of my faves of theirs is 'Everyday is Exactly The Same', from the soundtrack of the movie Wanted with James McAvoy & Angelina Jolie.

Great songs! I love when I can find that perfect song for the story I'm working on., Music can add the emotions we want to write, but can't always express. There is something about hearing the song that can help write the story.
Do you come by them accidentally? (or serendipitously?) or do you search for them?

Thanks Ash. Yup, indeed - songs have another level of feelings, emotions expressed in a different way. Bolstering for a story.

So far, all my song themes have come along serendipitously. Sometimes I'm working on a story and hear a song that makes me go 'aha!'. Most often though, I hear a song and the emotions trigger a prompt for a story, whereby I then use the song as the theme.

Thanks for dropping by! Hugs

I just have songs that inspire me to write, but they don't necessarily relate to the story.

Maybe I should change my approach there. Cool post.
Nahno ∗ McLein ™

Thanks for dropping by and commenting.

Songs that inspire you to write are good - they don't need to pertain directly to a story. Though it's true that when you find a theme to a story, it helps in another form, gives you another level of emotion/feelings to exploit.