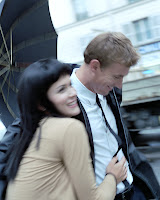 Apologies for no Writing Wednesday post yesterday. My Internet connection was hit and miss for most of the day, and add to it the fact that my brain is also in hit and miss mode at the moment, I didn't want to subject anyone to a totally senseless ramble (yes, even more senseless than usual!).

Back on board today, and wanted to keep it light and sweet. Digging through my Links trove, found this one. Perfect for all the in-a-couple women out there - whether in Real Life or fictional! So, how do you know your man still digs you? Here are some clues.

The article is from the MSN Lifestyle Love & Relationships page, and is written by Ann Hodgman. I accessed it just last week.

18 Clues He's Still Crazy About You

You say your husband can't express his feelings? Here are all the funny little ways he says, "I love you."

1. When you wear a T-shirt, boxers, and socks to bed, somehow he still thinks you're cute.

3. The only framed photo on his bureau is of you at age ten — with short bangs, cat glasses, and metal braces. (If he kept it in his wallet, you would have to kill him.)

4. He automatically smooshes all spiders for you.

5. He tried — unsuccessfully, but he tried — to clean the rust ring his shaving-cream can left on the sink.

6. After you rear-ended that Lexus in the parking lot, his very first words were "Are you OK?"

7. At this point, his wedding band is so tight, it makes his finger look swollen — but he swears he'd feel naked without it.

8. He doesn't try to guess what you want for your birthday — he asks your best friend.

9. He's incapable of putting dishes into the dishwasher but has learned to stack them in the sink.

10. He understands which old boyfriends are fair game and which aren't.

11. He doesn't "whoop!" while watching the Super Bowl anymore. OK, he does, but he's definitely cut back the whooping by about 20 percent.

12. He'll pick up a box of tampons at the drugstore without wincing.

13. Though you've had several kids together, he's never once announced, "We're pregnant!"

14. He wears that "Kiss Me, I'm Irish" sweatshirt you bought him during a weak moment — sometimes even in public.

15. He's careful never to deal with nose hairs in your presence.

16. When you drag him to sentimental movies, he doesn't sit there and snicker. (He may fall asleep, but he won't snicker.)

17. He doesn't comment on your new haircut unless you ask him to. And then he lies.

18. He may forget to give you a card for Valentine's Day, but at least he understands this is a criminal offense. And he's prepared to pay the price.

LOL fun list, although a lot of those don't relate to my dear hubby, like the sports ones -- he loves me enough not to care about sports at all hehe -- but many of the list items were relevant to him, and had me giggling away.

Except for the B-day one, he doesn't ask my Best Friend. He asks, me directly, what I want for my b-day or xmas.And I'm very grateful for that!

Most of them are sooo true, like the romantic comedy one. My husband has been known to fall asleep in front of rom-coms. But he asks me directly about the birthday gift too. :)