How I Saw The Characters of "Walking The Edge"

I'm doing something a little different today. Initially this post should've come up on Wednesday, but with the release delay, I couldn't get this up (and have it make sense!) so today it supplants my usual Progress Friday deal.

I know a lot of writers physically 'template' their characters from a famous person/actor/model or the like. I for one almost always have someone 'real' in mind when I'm writing a story. This helps me with imagining the story, developing it like a movie in my head with the real 'actors' to play out the parts. I've found this technique also allows me to remain consistent where physical descriptions are concerned, because the character is not a hazy assembly of bits and pieces but a 'real' person in my mind, literally.

Walking The Edge is no different. In fact, part of the story was propelled by the man whom I always saw as Gerard Besson, the hero in the book. It was partly because of him that I ended up with a Frenchman as a hero, and with a dangerous, ruthless cop on top of that.

So who is he? His name is Thomas Kretschmann, and he is a German actor who's played in many Hollywood movies. The first time I saw him was in the sci-fi fantasy flick Immortel Ad Vitam. He played a human dissident leader who becomes the host for a vengeful bird-like Egyptian god. There was something Old Continent European and mysterious about him - must be his german origins! :)
Here he is in an advert for a Hugo Boss fragrance: 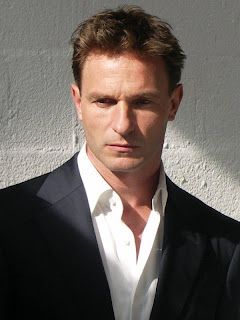 And here I had my hero! Now he's a cop, but he's the hands-on, on-the-field kind of guy. You won't really see him in a suit channeling James Bond in the book. Here's more the image you'd get:

In the story, he is described as "...His sandy blond hair was still mussed from sleep, and she could make out the corded muscles in his tense neck. The tautness of his clamped jaw alerted her to the fact that he was in a contemplative mood.
Sitting up straighter, she reached out and touched his cheek, making him turn his face toward her. She gasped softly when she encountered his eyes. Deep set and narrow, they were of a sparkling turquoise hue, making her think of mysterious tropical waters. ..."
And then there's this part where I literally saw him in this get-up, where "...Even in the dark interior, she could make out the hard, chiseled lines of his features and could imagine the flash of his sea-blue eyes in the dimness. His clothes, especially the denim jacket, gave the illusion that he was in a casual mood, but she knew the calm composure was deceptive, a façade for inherent danger and ruthlessness. ..."

Now, who's this "she"? Her name is Amelia Jamison, and she's the heroine in the book. I always had an idea what Amelia looked like; check out the description I'd written for her - that's always how she appeared to me: "... Amelia Jamison, the woman who stared back at her, was a beauty. Delicate features that resembled the work of a master sculptor graced her face. Perfect cheekbones. Smooth, flawless skin. Crystal-clear blue eyes with extremely thick, dark lashes. Wide, full mouth. Dainty nose. Short, honey-toned hair. ..."

I didn't know who she was - my model - when I started the book, but then I thought long and hard, and Charlize Theron came to my mind. Look at her here - she was the spitting image of Amelia!


And the other person whom I always 'saw', is Peter Jamison, Amelia's "husband". I knew he was my bad guy, but he was more the quiet, cool and composed type of baddie, the one who rocks Savile Row suits and drinks vodka martinis. Just one look at this bloke would chill the blood in your body, and I had my perfect 'template' when I saw actor Julian Sands during one season of 24.

Here's how Peter is described in the book: "... He was a devastatingly handsome man, tall, with pale skin as flawless as the most precious Italian marble. His eyes were deep green, and locks of his expertly cut dark hair—the shade as intense as gleaming mahogany—brushed his wide forehead, which tapered down to an otherwise lean face. ..."

And this is how he's supposed to look like:

I had to change his hair colour to dark, gleaming mahogany because as my editor pointed out to me jokingly, my book was peopled by blond people!

And finally, the last person who popped inside my head when I was writing this book is French police Capitaine Rashid Nasri, Gerard's best friend and right-hand man. I needed a generic description for him at first, because I hadn't intended for him to be anything more than Gerard's sidekick in the book.
But Rashid's character evolved and morphed... and some people who have read the story at critique or ARC stage have asked me if he'll get his story one day. The truth is, I don't know! I'm keeping him in mind as a future hero for his own book though.

In Walking The Edge, he is described as "...a handsome man with olive skin, dark eyes, and close-cropped black hair ..." and this is how I pictured him:


So there you are - a roundup of the main characters peopling Walking The Edge. :)

And another thing - I'm up at fellow Noble Romance and Hot New Talent author Chris Lange's blog today. Chris and I wanted to do something different from the usual interviews, so what we give you is a behind-the-scenes look at Walking The Edge.

I can guarantee this is a wonderful story. Can't wait to read it again.

The third picture of Gerard is what I envision him to look like. And he certainly lives up to my dreamy expectations *sigh*

Lol - thanks MBR! I worked a lot with that same picture in my mind.

Thanks, I appreciated this web publication publish. I discovered this page using Bing search, as a consequence undoubtedly loved reading over it, so I will most likely stumble through once more within a week as a consequence read up on what's fresh Great Critique!

As a final point , allow me thank you for your patience with my English as (I am confident you have figured this at this time ,), English is not my original language therefore I am utilizing Google Translate to form out what to note down what I sincerely wish to articulate.

First-rate goods from you, man. I've be familiar with your stuff previous to furthermore you are just extremely brilliant. I really like what you have acquired here, undoubtedly like what you're saying along with the method in which you reveal it. You make it fun plus you still care for to keep it judicious. I can not wait to read widely more from you. This is truly a marvelous site.

As a final point , permit me thank you for your understanding with my English as (I am certain you have become aware this at this time ,), English is not my initial language as a result I am utilizing Google Translate to shape out how to enter what I sincerely mean to write .