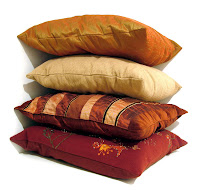 Apologies for not posting yesterday - my Internet went off in the afternoon, came back for 2 minutes, then went berserk again for another 5 minutes, to settle down for 1.5 minutes, then go all crazy again! I actually gave up, and did nothing except some reading and writing offline (in a way, had I not been forced offline, would I even have tackled those jobs...? Biiiig questions...).

Anyhow, I was at the bank this morning and having to fill in the deposit slip, whereby I have to put in today's date... Was flabbergasted to realize we're already into the second half of February!!! I have absolutely no clue where this year is going. One minute it was 2011 and I blinked *poof* we're in the middle of February!

And all I seem to be doing is asking myself tons of questions. What's next? What to do? Where to focus more? How to organize it all? Who/what deserves most of my time and dedication right now? All of these have been roiling inside my head, and I gotta admit, when you're thinking every step through to the nth degree and second-guessing all your moves before you even lift a foot forward, you're not exactly in a creative mood where the words just flow off your keyboard and onto the screen.

Still, being forced to 'work' yesterday when the connection went off, I have made some teeny progress. The counter for Against The Odds moves by a little under 500 words (pathetic, I know. But it's 478 words more than 0, know what I mean? I'll bask in that!). Plus I've dusted off an old short story and I think this one might just be getting a new lease of life with one of my publishers. Not to mention a special call for submissions story I'm putting together as a proposal this weekend, and which will go to the concerned parties next week...

All in all, there is progress, but I wish it were more concrete, as in, more words to show what I've done. When all your work's in your head, you're hard pressed to show your labour, innit?

Looking forward to a productive weekend catching up on email and promo stuff, all while I work on the above-mentioned proposal, the short, and a special project I'm getting to make with a friend (this one's hush-hush for now, but I'll let you know the minute I can *grin*)

Have a lovely weekend, peeps!

You still use deposit slips? Everything here is electronic. I think it went faster though when we did use the slips

Lol, yes. We still use deposit and withdrawal slips at the bank. We have the electronic option too, and of course automatic teller machines, but we still hold on to that idea that we physically take our money into the bank :)