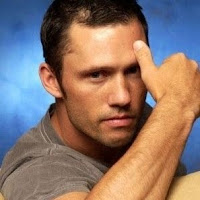 As you probably know by now, the Corpus Brides series, of which I am writing Book 2, Before The Morning, is about espionage, and the women (and some men!) caught in the meanders and workings of a clandestine agency.

So, espionage means spies - guzzling vodka martinis in glamourous settings, wearing designer clothing, getting the girls, and the men too (since this is a heroine-centric series)--BLEEP!!! Wait a second - that's a cue for a James Bond story. Not for one of mine!
For you see, a spy's work - as Michael Westen from Burn Notice (pictured to the left here!) will tell you - is not about glamour but mostly about using your wits before you even consider using your brawn.
Put in a spy heroine, and what's she expected to do? Understand how her targets work, right? And these targets are... Men! Of course!

Now how do you come into the skin and shoes of a super-efficient spy who also happens to be a master manipulator - as is the case for Rayne Cheltham aka Kali, the heroine of Before The Morning?

Simple - you learn everything you can about how men function. You find out what they like, and you give them exactly that, all while you do your work covertly right under their nose. :)

Take a look at this following article - it has come in handy when I've been penning Rayne as that master manipulator. You don't need to go to the lengths she goes to land your goal in the net, but every woman out there can take a few clues and cues from the following advice. Most of these are really no-brainers (duh!), but some will surprise you!

The article is from Cosmopolitan Australia, and can be accessed here (with the really snazzy pics in the slideshow!).

While it’s tempting to think that men only want two things – steak and sex – they actually have a secret wish list of emotional needs that you may or may not be meeting. Here are the top ten simple things that your man wants from your relationship.

1. Tone down the drama. Ever burst in to tears because your jeans suddenly no longer fit? Or hyperventilated because your fave celeb didn’t win Dancing with the Stars? Men generally put up with our occasional trivial freak-outs, but make sure you keep it in check. What happens in your own home is private, but do not cause a scene in front of his friends or family – ever.

3. Romance. What guy would actually scoff at you for bringing him a present? Everyone loves being spoilt once in a while. Upload some new songs on his iPod, cook him a steak, or even send him a dirty message telling him what you’re going to do to him later. Yep, that falls under the category of romance for guys.

4. Be truthful. If your guy has control-freak issues, he either has a sixth sense that he’s being lied to, or alternatively he is simply a control-freak. Either way, always be up front and honest with your man. A little bit of honesty goes a long way, and he’ll feel completely assured knowing that you’re being honest about things.

5. Tickle his taste buds. You don’t need to pop on an apron and whip up a baked dinner every night, but men love food and love it even more when it’s homemade. Surprise him by making his favourite meal after he’s had an incredibly tiring day at work – it’s like the reverse of him taking you shoe shopping.

6. Sense of humour. Ask every guy what he looks for in a girl and this will always pop up. A sense of humour in a relationship translates in to being relaxed, in the moment, and having lots of laughs. If this isn’t happening in your relationship, your man is going to think you’re distracted or uptight.

7. Listen to him. Whether he’s had a tough day at work or has found out his favourite footy player is switching teams, sometimes a beer with the boys just doesn’t cut it and he needs someone else to listen to him. Listen to him, but then drop it immediately. When he’s ready to bring it up again, he will.
8. No game-playing. The original game-playing of acting disinterested and waiting a certain amount of hours before texting back has gone out the window. In the end, this will only have two possible outcomes. He’ll be put off by your lack of interest and go with a stronger choice or he’ll pursue you for so long that he’ll probably end up resenting you. You don’t need to act overly eager, but if you like him – let him know.

9. Silence. The old adage of silence is golden is certainly true when it comes to the male species. If he’s a little quiet, don’t pressure him. Unlike women, if a man is quiet it doesn’t necessarily mean something is wrong – it just means he has nothing to say!

10. An independent woman. Men find independent women sexy, bottom line. It doesn’t mean you have to make a song and a dance when he offers to pay for coffee, but it’s attractive to have your own interests and do things on your own every now and again. Plus, when you’re feeling not so independent and want some TLC from your man, he’ll be more than willing to oblige.

Hi, Zee!
Excellent post! I found myself going down the list and checking off points. Although I have to say, one time my wife got a hand on my MP3 player and threw the Rent soundtrack on there. New music isn't ALWAYS a nice surprise LOL
This is a must-read for women who want to know what men want!
J.S.

I really liked the article, and the very cool blog

Lol, thanks JS! Glad to see you popping over. Oh yeah - we should always be learning how men's minds work! Will help in life and in writing. :) Hugs!